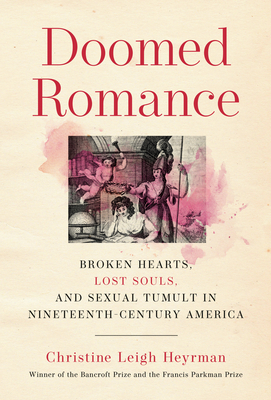 In 1825, Martha Parker, a gifted, ambitious young woman from New England who aspired to become an educator and a foreign missionary, accepted a marriage proposal from schoolmaster Thomas Tenney. But several weeks later, she rejected Tenney in favor of rival suitor Elnathan Gridley, a clergyman headed for the mission field. Tenney’s male friends retaliated by sending an anonymous letter to the head of the foreign missions board impugning Parker’s character, and Tenney himself threatened to reveal more about their relationship, ruining her future prospects as a missionary. The scandal provoked a resistance within evangelical ranks over womanhood, manhood, and, surprisingly, homosexuality, that ultimately threatened to destroy the foreign missions enterprise.

Christine Leigh Heyrman is the Robert W. and Shirley P. Grimble Professor of American History at the University of Delaware. Her other books include Southern Cross: The Beginnings of the Bible Belt, which won the Bancroft Prize, and American Apostles: When Evangelicals Entered the World of Islam, which won the Francis Parkman Prize.

Laurie S. Fulton served as U.S. Ambassador to Denmark from July 2009 to February 2013 and is co-chair of the Ambassadors Circle of the National Democratic Institute, a nonpartisan organization working to support and strengthen democratic institutions worldwide.

We invite you to support the author by purchasing copy of their book from Browseabout Books. Call-in orders are accepted at (302) 226-2665 or you can stop by the store to purchase a copy. For store hours, please visit their website. Each copy purchased comes with a signed bookplate.