This Event is SOLD OUT. 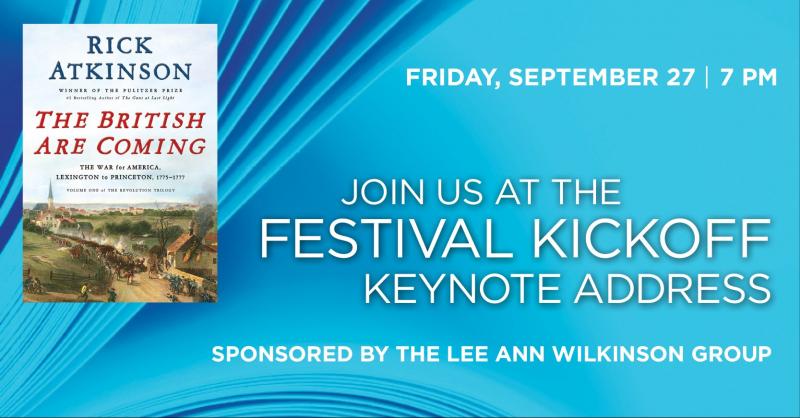 The History Book Festival keynote address by Rick Atkinson, Pulitzer Prize-winning author of The British Are ComingSponsored by The Lee Ann Wilkinson Group the program will begin at 7:PM at the Bethel United Methodist Church Fellowship Hall in Lewes. Following his keynote address, Mr. Atkinson will take questions and sign copies of his book.

Support our local independent bookstores by purchasing this book, in advance, at Browseabout Books or Biblion Books. Additional copies will also be available for purchase at the event.

About the book
The British Are Coming, Atkinson’s first volume of his Revolution Trilogy, recounts the first 21 months of America’s violent war for independence. It tells the grand story of who we are as a country, where we came from as a people, and what we believe in as a nation.

Atkinson sets the stage for the Revolution, telling the saga of early conflicts from both the British and rebel perspectives, making the mortal conflict all the more compelling. He brings the story alive with tales of key individuals, like Henry Knox, the former bookseller with an uncanny understanding of artillery; Nathaniel Greene, the blue-eyed innocent who becomes a brilliant battle captain; Benjamin Franklin, the self-made man who becomes the wiliest of diplomats; and George Washington, the commander in chief who learns the difficult art of leadership when the war seems all but lost.

Full of riveting details and untold stories, The British Are Coming is a tale of heroes and knaves, of sacrifice and blunder, of profound suffering and redemption. Atkinson shows us how the Revolution not only begat a nation, it also gave birth to the singular American temperament of aspiration and idealism, giving stirring new life to the story of our nation’s creation.

About the author
Rick Atkinson, who spent nearly 15 years working on his World War II trilogy, was a staff writer and senior editor at The Washington Post for 25 years. He is the author of The Long Gray Line, Crusade, In the Company of Soldiers, and the best-selling Liberation Trilogy: An Army at Dawn, The Day of Battle, and The Guns at Last Light. A winner of Pulitzer Prizes for history and journalism, he has also won many other awards, including the George Polk Award and the Pritzker Military Library Literature Award. Atkinson is one of America’s most acclaimed historians, who has long been admired for his deeply researched, stunningly vivid narrative histories.

History Book Festival News
Subscribe to have HBF news and events delivered to your inbox. We respect your privacy and will not share your information. bit.ly/HBFsubscribe