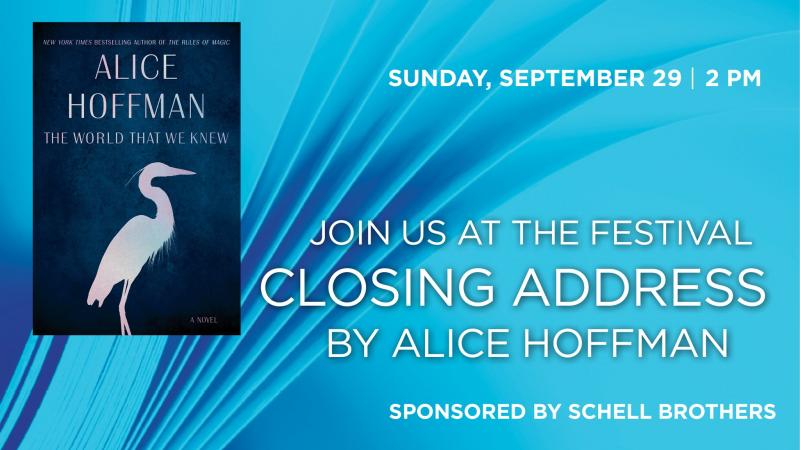 Sponsored by Schell Brothers, the program will begin at 2:PM at the Cape Henlopen High School Theatre in Lewes. Following her closing address, Ms. Hoffman will take questions and sign copies of her book.

Support our local independent bookstores by purchasing this book, in advance, at Browseabout Books or Biblion Books. Additional copies will also be available for purchase at the event.

About the book
In The World That We Knew, Alice Hoffman tells the story of the Jewish experience in France during World War II through the eyes of three young women whose fates are inextricably tied by the horror of their circumstances, the strength of love, and the deep mysticism of their faith in God and themselves. The tale is knit together with courage and sacrifice, devotion and loss, and with the boundless optimism and determination of youth in the face of unrelenting challenge.

A loving mother faces unspeakable sacrifice, a rabbi’s daughter audaciously reaches beyond her circumstances, young women and men come of age in the throes of turmoil, and a mystical golem is given life. As Jodi Picoult said, “Alice Hoffman’s new novel will break your heart, and then stitch it back together piece by piece. It’s about love and loss, about history and the world today, about what happens when man goes against the laws of nature for good and for evil. It’s my new favorite Hoffman book—and if you know how much I adore her writing, that’s truly saying something.”

About the author
Born in New York City and educated at Adelphi (B.A.) and Stanford (M.A. in creative writing), Alice Hoffman wrote her first novel at 21, seeing it published by Farrar Straus and Giroux shortly thereafter. She has gone on to publish over 30 novels, three books of short fiction, and eight books for children and young adults, with more than 20 translations and over 100 foreign editions. Known for their deep humanity colored by magical realism, several of her novels have been rendered into screenplays and have been listed as notable books of the year by The New York Times, Entertainment Weekly, The Los Angeles Times, Library Journal, and People magazine. Hoffman’s novel The Dovekeepers, which is the story of the survivors of Masada and considered by many to be her masterpiece, was hailed as “a major contribution to twenty-first century literature” by Toni Morrison.

History Book Festival News
Subscribe to have HBF news and events delivered to your inbox. We respect your privacy and will not share your information. http://bit.ly/HBFenews