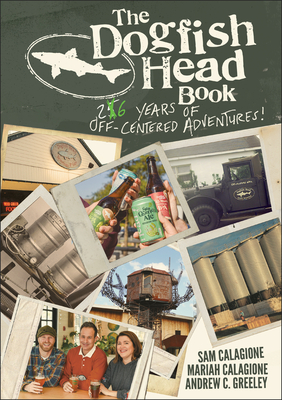 Come celebrate the launch of The Dogfish Head Book: 26 Years of Off-Centered Adventures, a celebratory chronology of the offbeat escapades that propelled Dogfish Head to become one of the largest and more well-known craft breweries in America. This lovingly told page-turner provides a detailed account of the brand’s history told through heartfelt stories from the authors, a timetable of Dogfish Head’s off-centered beverage releases and a plethora of co-worker-told tales. Written by Dogfish Head Founder & Brewer, Sam Calagione, Dogfish Head Co-Founder & Communitarian, Mariah Calagione, and longtime co-worker and Dogfish INNkeeper, Andrew C. Greeley, all three authors will be on-site to sign books at Browseabout Books on Sunday, November 28 from 4:00 p.m. – 5:00 p.m.

Sam Calagione has been focused on brewing beers with culinary ingredients since 1995 when Dogfish Head first opened as the smallest craft brewery in America. Today, Dogfish has grown into a 400+ person company and is one of the most recognized breweries in the country. Sam’s innovative style and collaborative spirit has earned him a reputation as one of the industry’s most adventurous entrepreneurs and brewers. Sam has authored four books and was named the James Beard Foundation’s Outstanding Wine, Spirits, or Beer Professional in 2017.

Mariah Calagione is Dogfish's Social Impact Leader. In addition to founding Dogfish alongside husband Sam, Mariah’s role has grown from captaining Dogfish Head’s grass-roots marketing, PR and social media world to ultimately focusing on her true passion, the charitable-giving arm of Dogfish, Beer & Benevolence. Mariah has served on the boards of The Nature Conservancy, University of Delaware, Rehoboth Beach Film Society, and the Lewes Chamber of Commerce, just to name a few. She is currently the Chair of the Board of her and Sam’s alma mater Northfield Mount Hermon School. Sam, Mariah, and their family reside in coastal Delaware.

Born in Golden, Colorado, Andrew C. Greeley moved to the Delmarva Peninsula upon graduating from Washington College in Chestertown, Maryland, in 1999. After spending 15 years working at various independent high schools as an English teacher, coach and mentor, Andrew joined the Dogfish Head team in 2012. Throughout his time at Dogfish Head, Andrew has worn many hats, from a seasonal tour guide to Tour & Tasting Room Manager to now, the INNkeeper and General Manager of the Dogfish INN, Dogfish Head's beer-themed, canal-side hotel, located in Lewes, Delaware. When he is not at work, Andrew loves spending time with his two kids and his fiancé, Brooke, and is extremely passionate about the outdoors, craft beer, writing, leadership and community.