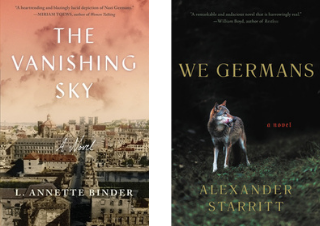 Be a part of a live, interactive conversation with L. Annette Binder, author of The Vanishing Sky, and Alexander Starritt, author of We Germans: A Novel.

The Vanishing Sky is a World War II novel as seen through a German lens, a story of the irreparable damage of war on the home front, and one family's participation-involuntary, unseen, or direct-in a dangerous regime. Drawing inspiration from her own father's time in the Hitler Youth, L. Annette Binder has crafted a spellbinding novel about the choices we make for country and for family. Included in the New York Times Book Review's Summer Reading Guide for Historical Fiction, Kirkus Reviews describes this debut novel as "A masterful story of war, horror, and love...Binder provides a family's-eye view of the terror and trauma, offering readers a unique perspective on the war."

We Germans is written as a letter from a German soldier to his grandson recounting the terrors of war on the Eastern Front, and a postwar ordinary life in search of atonement. The letter is at once a thrilling story of adventure and a questing rumination on the moral ambiguity of war. This "raw, visceral, and propulsive" novel is a New York Times Book Review Editors’ Choice. Kirkus Reviews writes, "A small masterpiece... Starritt shows courage in his approach... A risky, provocative novel with exceptional writing."

L. Annette Binder was born in Germany and immigrated to the United States as a small child. The Vanishing Sky, her first novel, is inspired by events from her family history. Annette holds degrees from Harvard, Berkeley and Harvard Law School. She has an MFA from the Programs in Writing at the University of California, Irvine. Her story collection Rise (Sarabande 2012) received the Mary McCarthy Prize, and her stories have appeared in the Pushcart Prize Anthology, the O. Henry Prize Anthology and Public Radio's Selected Shorts. She lives in New England with her husband and daughter.

Alexander Starritt grew up in Scotland in a cross-cultural household, part Scottish and part German, speaking both English and German fluently. His career led him to Hamburg and Berlin, where he studied and translated German literature into English. The work gave him a unique perspective on the political and cultural relationship between Germany and Britain. Like Meissner, Starritt’s grandfather, a German, was drafted into the Wehrmacht, fought in Russia, and spent several years in captivity. He later escaped across the wall to West Germany with his wife and child, Starritt’s mother, who became a part of the vibrant West Berlin scene through the end of the Cold War.

We invite you to support the authors by purchasing a copy of the books from Browseabout Books.
Call-in orders are accepted at (302) 226-2665 or you can stop by the store to purchase a copy. For store hours, please visit their website. Each copy purchased comes with a signed archival bookplate.