Conversation with Ernest Thompson | The Book of Maps 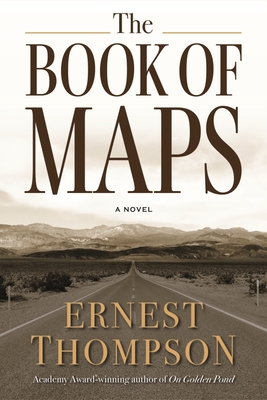 Join us in the library or online for a conversation with author Ernest Thompson on his debut novel, The Book of Maps.

In the summer of 2002, Brendan Tibbet, a filmmaker whose luck has run low, takes his ten-year-old son Brenlyn on a raucous road trip across America. Following a 1930s travel guide Brendan purchased at a yard sale, the two-week trek from LA to New Hampshire covers 16 states, hitting the iconic stops along the way, Yosemite, the Great Salt Lake, Yellowstone and Mt. Rushmore, and the Rock and Roll Hall of Fame, replete with wild exploits both hilarious and perilous, but it's the interior journey that is enlightening, deeply poignant and life-changing. The Book of Maps, with its powerful father-son relationship and one man's relentless albeit unintentional quest to evolve into the better angel, will capture the imagination of readers.

Ernest Thompson won the 1981 Academy Award for Best Adapted Screenplay for On Golden Pond, the hit film starring Katharine Hepburn and Henry Fonda based on his play of the same name. In 2001, he directed a live TV version of On Golden Pond, starring Julie Andrews and Christopher Plummer. His other notable writing credits include 1969, a film starring Robert Downey, Jr., Kiefer Sutherland, and Winona Ryder; The West Side Waltz, which opened on Broadway, starring Katharine Hepburn, and for which he later wrote and directed a television version, starring Shirley MacLaine; and the screenplay for the feature film Sweet Hearts Dance, starring Susan Sarandon and Jeff Daniels. He lives most of the year in New Hampshire, close to where On Golden Pond was filmed.

We invite you to support the authors by purchasing a copy of their book from Browseabout Books by clicking HERE. Call-in orders are accepted at (302) 226-2665 or you can stop by the store to purchase a copy. For store hours, please visit their website. Each copy purchased comes signed. Books will be available for sale and for signing at the event.

NOTE: this session is available to attend in-person or through Zoom. You MUST REGISTER and indicate which you prefer.