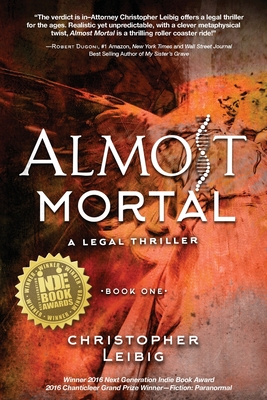 Christopher Leibig will be signing copies of his legal thriller, Almost Mortal.

Emerging criminal defense attorney Sam Young has always known he had a gift. Or a curse. Minor psychic abilities, he sometimes thinks. Sam is hired by an attractive young nun, Camille Paradisi, to help discover the identity of a serial killer before her Pastor is exposed for not having turned in the man after a confession – thereby allowing another murder to occur. While Sam’s psychic abilities seemingly enhance as he investigates the case, he quickly learns that the enigmatic Camille is not telling him everything.

Camille asks Sam to read sections of an old journal anonymously mailed to the Church which she tells him she believes may have been authored by the killer/confessor. The journal purports to tell the life story of a man with mind control and other special powers who claims to be a descendant of the fallen angels cast of out heaven by God.

Sam ponders its relation to the case while using his legal and investigative skills to establish the identity of the killer. As he learns more about the murders, the mystery author, and Camille, Sam begins to realize the so called “Rosslyn Ripper” case may have implications beyond his imagination – including about his own past.

The signing will take place on Saturday, October 1, from 3 until 5 PM.