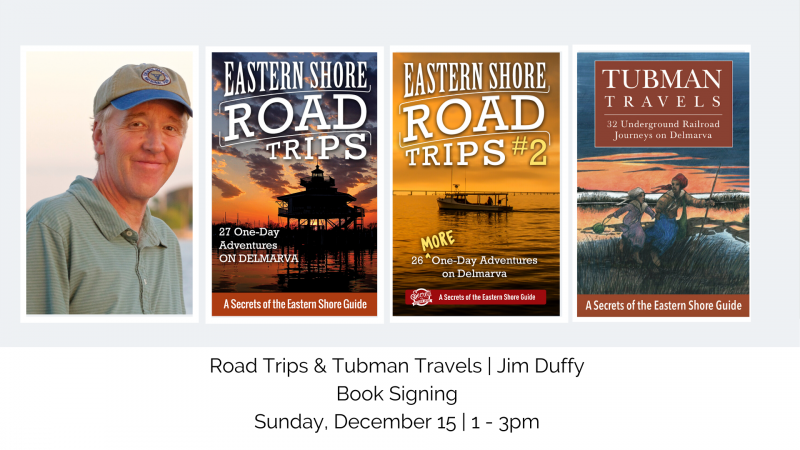 Eastern Shore Road Trips (Vol. 1): 27 One-Day Adventures on Delmarva features the backroads, quaint towns, beaches and parks in a region that ranks as a true American treasure—the Delmarva Peninsula. Along the way, Duffy shares funny, fascinating, and unforgettable tales from days gone on the Eastern Shore and in Southern Delaware.

In Eastern Shore Road Trips (Vol. 2): 26 MORE One-Day Adventures on Delmarva, Duffy explores all-new destinations on the Delmarva Peninsula in itineraries that stretch from southernmost Virginia to northernmost Maryland on the Eastern Shore and throughout the state of Delaware.

Readers can follow in the footsteps of true American heroes in the pages of Tubman Travels: 32 Underground Railroad Journeys on Delmarva. The locations where keystone moments unfolded in the lives of Harriet Tubman, Frederick Douglass, and numerous other champions of freedom are part of this guidebook.

Jim Duffy learned to write stories the old-fashioned way, starting out as a cub reporter with a small newspaper and eventually becoming an award-winning magazine editor and writer. He is the co-founder of Secrets of the Eastern Shore, which celebrates that peninsula in words, pictures, and products.