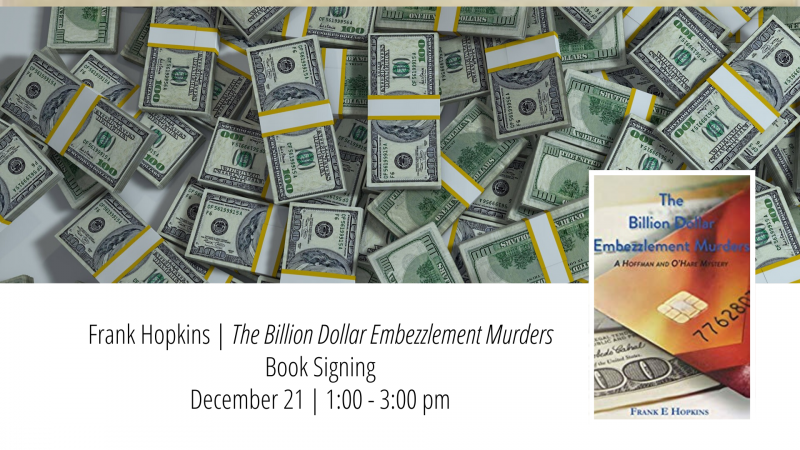 Frank Hopkins will sign his recently released novel, The Billion Dollar Embezzlement Murders, the thriller sequel to Abandoned Homes: Vietnam Revenge Murders. The book starts with the heinous murder of a participant in a billion dollar embezzlement of a Delaware company, the Liberty Credit Card Co. The action switches to the continuing romance of Margaret Hoffman and Paul O’Hare started in the first novel. They marry, have a successful release of the book they wrote about the Skeleton Murders, and decide to spend their honeymoon in Greece. The embezzlement continues as the crime’s ring leader orders the murder of Joann Cummings, who discovered the crime. She avoids the first two attacks, at her home and at a mountain cabin in West Virginia, but fearing for her life she flies to Greece to enlist the help of Margaret and Paul to help solve the crime. As they become involved, an attempt is also made on the authors’ lives in Mykonos, Greece and Duck, North Carolina. The action returns to the U.S. as the Delaware State and Greek police get closer to solving the crime. The criminals make plans to leave the U.S. to live in a country without a U.S. extradition treaty. Will the police or the ringleader be successful in their quests?

The Billion Dollar Embezzlement Murders is the second book in the Hoffman and O’Hare Mystery series. Abandoned Homes: Vietnam Revenge Murders is the first book in the series. Frank Hopkins will also sign his other three novels: Unplanned Choices, The Opportunity, and Abandoned Homes: Vietnam Revenge Murders, which the Maryland Writers Association awarded first place for a novel in the mystery/thriller category in their 2018 Novel Contest. He will also sign his collection of short stories, First Time, which the Delaware Press Association awarded it second place for a collection of short stories by a single author in their 2017 Communications Contest.

He has lived in Delaware since 2001, after residing in the Washington, DC area for most of his life. He spent his formative years in the New York City area until he graduated from Hofstra University. The three locations provide settings for his novels and short stories. He is active in the Rehoboth Beach Writers Guild, the Delaware Press Association, the Eastern Shore Writers Association, the Maryland Writers Association, and the Mystery Writers of America.