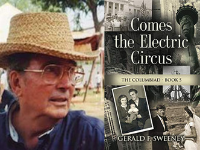 Browseabout Books welcomes author
Gerald F. Sweeney for a signing of his book,
Comes the Electric Circus.
Saturday, July 13, 9:00 - 11:00 am

Gerald F. Sweeney has completed a series of seven novels called The Columbiad that follows one family through the 20th Century. On November 11th, the one-hundredth anniversary of the end of World War 1, the saga’s final novel, Comes the Electric Circus, was published.

Comes the Electric Circus is a novel that reflects the tumultuous changes that occurred between the traditional 1950s and the mind-blowing ’60s. The story of the romance between two young Manhattanites at a time when New York became the world’s capital of finance and the arts, captures the evolution of their love in the midst of the radical developments in the social and intellectual shifts that reshaped America. Working in the lively television and magazine communication business, the couple witnesses conventional, conservative values spin out of control with the advent of the sexual revolution, the Beats, the Boomers, cool jazz, New Journalism, the rise of television and the continued escalation of the Cold War and Space Race. How does the young couple survive the mayhem and maintain their closeness?  The other books in The Columbiad series include Eagles Rising, First Lights, Crashing into Sunrise, Tournament of a Distinguished White Order, Yo Columbia! and Wizard Ho.

Gerald F. Sweeney is an Army vet and a Michigan graduate. His business life was consumed by Manhattan’s madcap magazine business where he overworked in various capacities including publisher. Energized by JFK, he made a seven-year detour into government work including a stint on Capitol Hill. Retired to the Eastern Shore after working in Europe, he is blessed with a large family.