Book Discussion/Signing | Where the Angels Lived 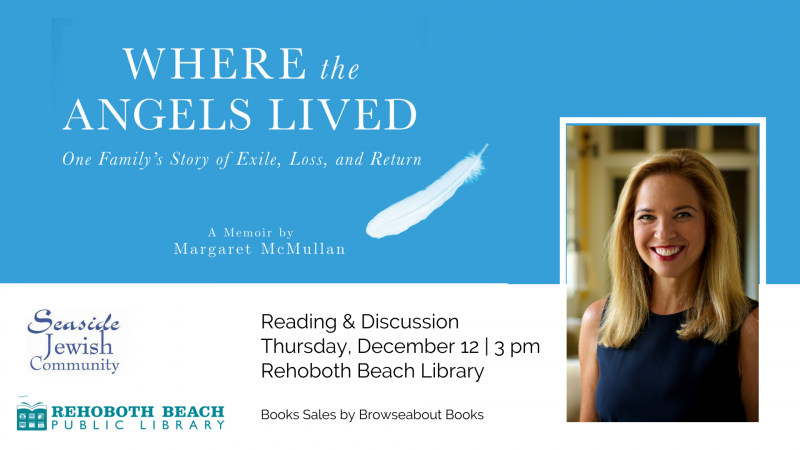 Please join us at the Rehoboth Beach Library for a special presentation by award-winning author Margaret McMullan as she discusses her new book, Where the Angels Lived: One Family’s Story of Exile, Loss, and Return.”  Register Here

The moment she discovered the existence of Richárd, a long-lost relative, at Israel’s Holocaust Museum, award-winning author Margaret McMullan began her quest to uncover the forgotten history of her ancestors.

Historical, authentic and family-oriented, “Where the Angels Lived” tells the tale of a somewhat parallel universe that exists even in the 21st century—dealings with Soviet-style bureaucracy, skepticism, anti-Semitism, and ironically, the same sort of isolation and rejection McMullan’s Jewish Hungarian family experienced in 1944 before they were forced into concentration camps.

“For years, my mother worried that ‘it’ would happen again. I thought she was just being paranoid,” said McMullan. “The Holocaust didn’t start at the gas chambers. The hatred was gradual. It began with jokes, stereotypes, prejudice and escalating violence. Then came an authoritarian leader, who quietly and systematically changed the laws.”

Throughout her new book, McMullan quickly discovers just how distinguished and influential her relatives appear to have been before the Holocaust. However, no one seemed to recall the man whose name she saw that day in Israel: Richárd Engel de Jánosi. With the help of students, strangers and long-lost relatives, McMullan slowly pieces together bits of information about Richárd’s past she never would have found without venturing to her family’s homeland.

Heart-wrenching, passionate and insightful, McMullan’s memoir beautifully documents the relentless determination of her journey to pick up the pieces of her family’s fragmented history throughout the Hungarian Holocaust. Straddling memoir and reportage, past and present, this story reminds us all that we can escape a country, but we can never escape history.

McMullan will address the research and Fulbright application process that eventually brought her to Hungary, the importance of detailed note-taking and organization during the research process and how to put the pieces together into a powerful and emotional memoir. There will also be a PowerPoint presentation showing newly discovered pictures and documents from Israel, Hungary and Austria taken by McMullan. For more information on this upcoming event, visit www.margaretmcmullan.com.

This program is made possible through a partnership with Seaside Jewish Community, Browseabout Books, and the Rehoboth Public Library and is free and open to the public.

About the Author
Margaret McMullan is the author of eight award-winning books including the novel, “In My Mother’s House” and the anthology, “Every Father’s Daughter.” Her work has appeared in USA Today, the Washington Post, the Huffington Post, the Los Angeles Times and the Chicago Tribune, among others. She received an NEA Fellowship and a Fulbright in Hungary to research her new book, “Where The Angels Lived: One Family’s Story of Loss, Exile, and Return.” For more information, visit www.margaretmcmullan.com.